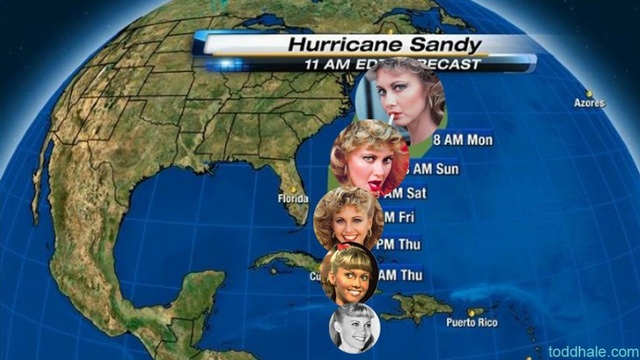 In honor of Frankenstorm, formally known as Hurricane Sandy I’ve decided to put together a collage of Sandys I’ve loved over the span of my life!

1. Sandy Olsson from Grease “the movie” how I pretended to be her countless times when I was a little girl! Like the hurricane, she started off as a sweet Bobbi-sockser and soon changed into a teen vixen to please and get her man back. (that’s not the reason why I wanted to be her…I just liked her clothes and the songs she sang, I swear…! ) But I did however make up a song that if you want me to sing I’ll post a video tomorrow upon request if WE DON’T LOOSE POWER!! Ahn!!

2. Look at Me I’m Sandra Dee….Another Grease song lyric but its hold true here! Sandra Dee was such an iconic American actress, all American girl & goodie-two-shoes! The Complete opposite of what this hurricane is!!

3. Fifi, That ain’t a name for this mutt.
So how about Champion?
Champion you’re anything but.

We could call him Tiger, But there’s no bite in him,
Tiger! Kittens would frighten him.
Rover! When you think it over,
Rover is the perfect name for this dumb look-in’ dog.

Sandy, Sandy’s his name if you please.
If you don’t be-lieve me ask anyone of the fleas
Residing on Sandy,

True he ain’t pedigreed, Sandy, there ain’t no better breed.
And he really comes in handy,
‘Specially when you’re all alone in the night
and you’re small and terribly frightened it’s
Sandy, Sandy who’ll always be there!

I figured I’d just sing the whole song being its the biggest musical of all time!! Just like this hurricane may be since the 1930’s (when Annie takes place) this dog really has no influence on my life, but the musical Annie does! I was in Annie multiple times as a kid in the local community theater and in sleep away camp broadway theater reviews….pepper, Molly, Collins, then finally ANNIE were the rolls I played. I was always an orphan!! Wahoo!! I really wanted to play Grace, but I wasn’t old enough! Oh well!

4. Sandra Lee: Sarah Lee’s granddaughter. I loved watching her on TV on her shown Semi-Homemade on the FoodNetwork. Today I made a batch of cupcakes Sandy Lee would be proud of, incase the electricity in my town blows and I need something sweet and moist to sink my teeth into! I bagged them up to keep fresh. Will frost when needed! Betty Crocker is my hero!! 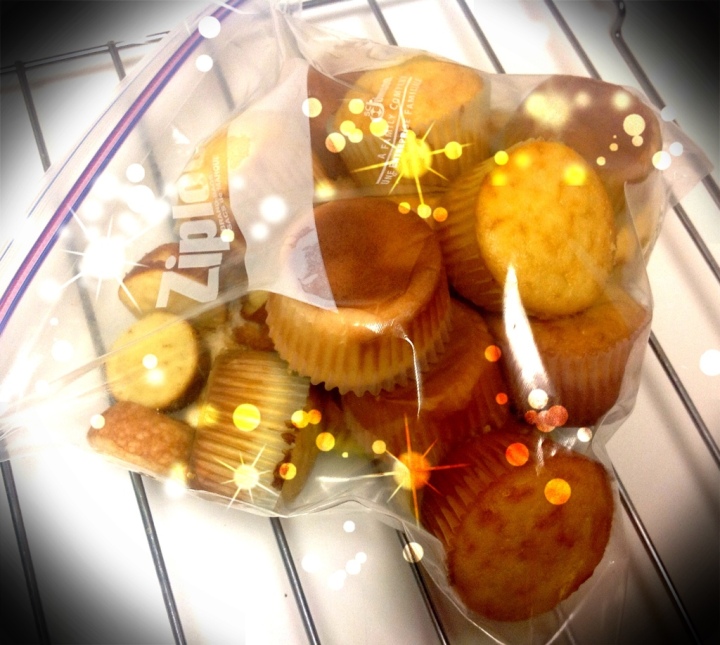 5. Sandy Cohen’s from The OC! I added him to this list because he was Seth Cohen’s Dad and when I was 15, I wanted to marry Seth! (guilty)

6. SANDY FROM SPONGE BOB SQUARE PANTS!!! Oh how I loved her so!! She was my favorite!! As a Texan native squirrel she moved under the sea for a science experiment and befriended a sponge! Only on nickelodeon!! Ya think she’s the cause of this storm? I mean, she does go into crazy fits of rage that can cause tsunami like waves!!! Wwwoowww!!

As I made this collage of “SANDY” I realized that many of the character are a result of musical theater! After fashion, theater is my love! So I guess for this post including inspirations from musical theater to pay homage to this potential horrific hurricane makes sense. Broadway can be whirlwind of sorts too, in its own right! For better or for worse!

I hope you all stay dry & safe right now & let’s all hope for the best!!
What are you guys doing to keep busy during this storm? Let me know!!